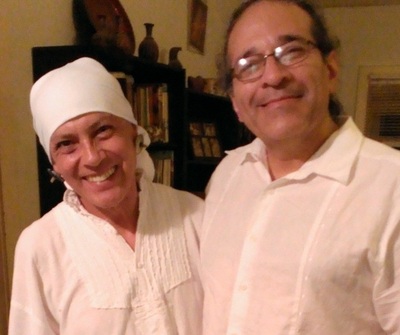 ABOUT
Most people, (including musicians) tend to  travel  within their own circles,
sometimes figuratively, sometimes literally, and sometimes these circles  intersect,
and sometimes they never touch, sometimes years may pass before musicians become aware
of each other's work and existence....

LUIS PEREZ IXONEZTLI
Luis Perez Ixoneztli, is originally from Mexico City, and is known worldwide as one of the first
musicians to play and record Meso American instruments at the behest of the Mexican government,
with his composition and subsequent recording in 1981 entitled:
IPAN IN XIKTLI METZTLI
(In the Navel of the Moon - in English)

This recording introduced Luis to the world as a consummate musician, performer, composer,
instrument builder, costume designer and improviser, a true Renaissance man who travels extensively
thru Mexico assimilating several different indigenous peoples languages, spoken and musical, and their
instruments customs and cultures.

Luis continues to learn, speak and sing in several ancient indigenous languages including
Nahuatl, Maya, Raramuri = Yoemem, Yaqui Comcaàc, [Seri] Mazateco and Wixaàrika. [Huichol]
which he learned thru living with the indigenous from several different regions of Mexico.
He continues to utilize these instruments in non traditional settings,( his 2 and 1/2 year stint work with
CIRQUE DU SOLEIL's MYSTERE being a very specific case in point.)


He continues to compose music for theater, documentaries,
and is a frequent participant in film scores, and collaborations with artists ranging from Kitaro to Jackson Browne
to Hans Zimmer to Yes frontman Jon Anderson. His work since 1977 is a contemporary blending
of ancient instruments utilizing  regalia he has made, modern sound design, and theatrical lighting in non
traditional settings, in essence extending the traditions without being bound by them.


CHRISTOPHER GARCIA
Originally from (East) Los Angeles,CA, USA and of Mexican descent. (Same planet different world.)
Christopher  is a critically acclaimed in demand performer/composer/improviser/educator who continues
to perform  on 5 continents either on drumset in a variety of musical, chamber and symphonic settings,
as well as performances of North Indian tabla, or indigenous percussion of Mexico and the Americas
and the music of Frank Zappa.

His compositions for woodwind quintet were prominently featured at the first LATIN AMERICAN CHAMBER MUSIC FESTIVAL
in San Francisco, CA, USA, where he was the only performer, composer, improviser, to perform his own works.
He continues to compose for indigenous instruments of Mexico and several different instrument combinations including
compositions for
western harp,
classical piano,
or cello
Christopher continues to be in demand as collaborator for acoustic sound manipulation
for several television and film soundtracks.

CONTACT
Over a period of several months and communications the two musicians never seemed to be in the same city,
let alone the same continent, at the same time in order to meet.

THE MEETING
In February 2014, the stars lined up for the first time and they met at Garcia's studio in Los(t) Angeles where they
made music on their respective instruments for a 2 hour period. They agreed that they would get together again
when the stars lined up because each had to leave once again, Luis to Mexico to finish his suspended spheres
project, (recordings the playing of stalactites in virgin caves and Meso American instruments utilizing the natural
reverberations of the caves in the state of Guerrero, Mexico) and Christopher to Australia where he had a tour with
the Frank Zappa Alumni Band the Mothers of Invention.

Months passed once again and in July 2014 the stars once again were in alignment,
and they ended up back in the City of the Angels at the same time in the same room.
Once again they met, played and made music, the studio full of flutes with single,
and ocarinas made of bamboo, clay, reeds, and drums made from exotic woods and metals
with drum heads made double and triple chambers, Tarahumara drums, huehuetls, baa wehai,
teponaztlis, ayacaxtli and atecocolli, of deer, fish, goat, komodo dragon, turtle shells,
tlaiptzallis, huilakaptzlis, North  Indian table, South Indian kanjira, ghatam etc.

After a few hours of non stop MUSIC MAKING,
Luis Perez, who has a long history of performing solo,
said to Christopher
"Let us do something FANTASTIC!"

LOST TRIBEZ PRODUCTIONZ is the result of these artistic collaborations